Tiny Beetles In My Kitchen/Garage

Among the stored product pest category, the two most common are moths and beetles. To find out about stored product infesting moths scroll down to the next post. Today we’ll be talking about the beetles (“Love Me Do” is now playing inside my head!). 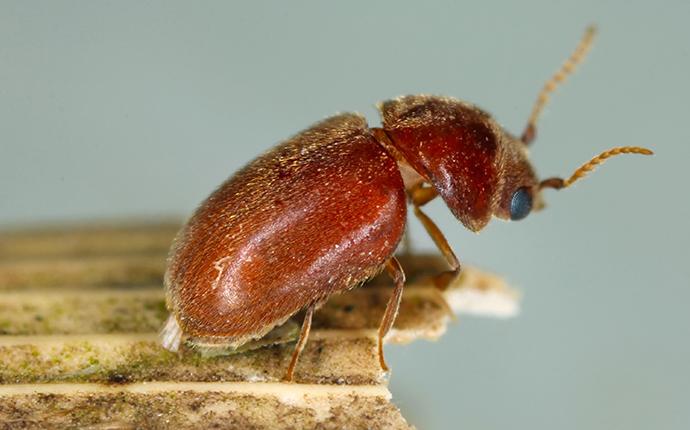 The two most commonly found in the home are the cigarette beetle and the sawtoothed grain beetle. First, these beetles are tiny, only 2-3mm long, and they have a stretched oval shape. They also feed on some of the same things: cereal, dried pasta, dry dog food, dried fruit, dried spices (paprika in particular), dried flowers, nuts, sugar, grains, seeds, furniture stuffing, old books, and tobacco. The biggest difference between these two is that with a magnifying glass you can easily see six sawteeth on each side of the sawtooth grain beetle’s prothorax (the body segment directly behind its head). The only way to be entirely rid of either of these beetles is to find and throw out the infested source.

Now that you have a magnifying glass out, do your beetles appear to have a long snout on the front? If so, then it may not be a beetle after all; it may actually be a weevil. Weevils prefer to infest and pupate inside of whole-grain kernels. Because of this, they are common in granaries and granary warehouses, but not that common in the home. When found in the home it is unusual due to decorative pieces of dried Indian corn, dried nuts, dried flower arrangements, dried fruit, rice, or stored cotton.

The rice weevil and the granary weevil both are dark in color but only the rice weevil will have pale splotches on its back. The method of eradication for both types of weevils is to eliminate the infected source. I would start my search in any dried corn or stored rice.

Complete the form below to schedule your no obligation inspection with Innovative Pest Solutions.

Cory H. is an excellent Technician. He shared his expertise and knowledge for my pest issues. I like the fact that he was open to all of questions and concerns, and we shared in solutions. These included things my family can or cannot do to resolve pest issues.Thanks Innovative Pest Solution for a valuable asset, and sending him my way.